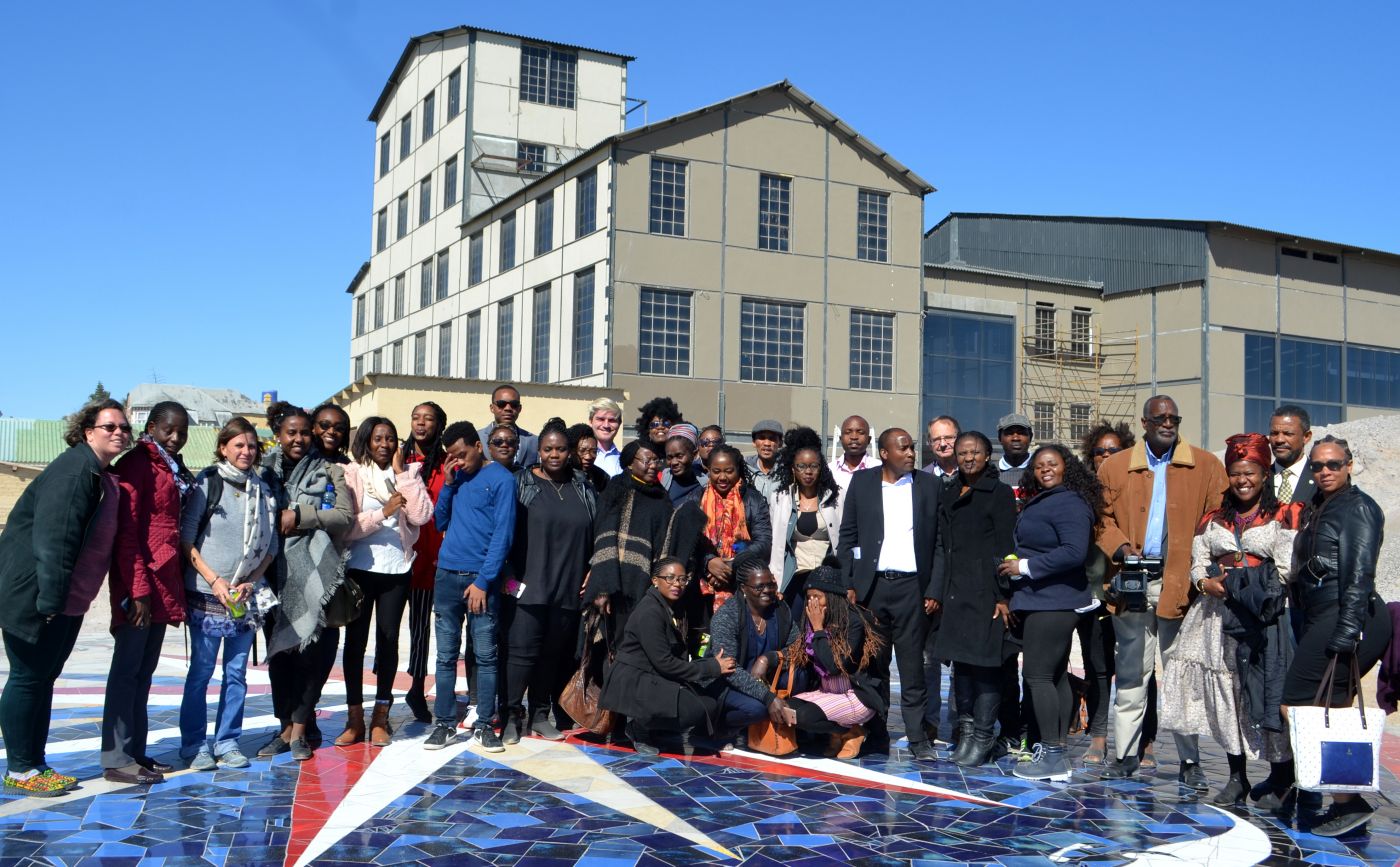 The Museums Association of Namibia (MAN) held its 29th Annual General Meeting in !Nami#Nus Constituency in the //Kharas Region on 6th-7th August. The meeting was attended by forty-two representatives of different museums and heritage institutions from all over Namibia who travelled south in a bus provided by the Ministry of Education, Arts and Culture. Participants travelled to Lüderitz from as far away as Ombalantu Baobab Tree Heritage Centre and the Kavango Museum in Rundu. The AGM was hosted in the auditorium of the new National Maritime Museum. The museum is still under construction, but one of the exciting parts of the AGM was the tour of the site provided by Mr Angel Tordesillas and Mr Fluxsman Samuehl.

The theme of this year’s AGM and Conference was the ICOM theme for International Museums Day - `Museums as Cultural Hubs’. People were welcomed to the AGM by the Deputy-Mayor of Lüderitz who thanked MAN for its reports which had provided recommendations for the town. She noted that whilst there was a saying that `Diamonds are Forever’, the fact was that the town had to prepare for a future where the diamond industry was no longer the main economic driver of the town’s economy. She spoke strongly about the important history of the town and how the town could benefit from heritage tourism. Mr Manfred Anderson gave an entertaining introduction to the history of the community and reflected on the importance of creating a museum on Shark Island.

The inspiring keynote address by the Deputy Executive Director, Ms Veno Kauaria (read by Ms Helvi Nghiimbwasha, argued that museums had a vital role to play in Namibia as educational resources that could help create greater mutual understanding between Namibians. She praised the work of the Museums Association of Namibia in supporting regional museum development. Ms Kauaria focused on the importance of recent changes in the museum sector in Germany. She pointed out that new guidelines on collections from “colonial contexts” had created opportunities for partnerships between German and Namibian museums that could involve training, the development of museum buildings and the possible return of cultural artifacts of particular cultural or historical importance.

One important panel at the AGM provided the opportunity for museum workers to give their opinions on where the Cape Cross (made in Portugal and erected on the Namibian coast in 1486) should be kept following its return from Germany. Presentations were given by the National Maritime Museum, the Cape Cross Museum, the National Museum of Namibia and the Swakopmund Museum. The three main factors that were considered were: Conservation considerations, Accessibility for visitors and the Context (in terms of positioning the padrao within a story-line).

The AGM also provided an opportunity for members to learn about new mobile exhibitions which were being produced by MAN, such as the Oombale dhi Ihaka travelling exhibition. Another panel introduced new regional museum projects with four new museums being showcased. A very interesting and animated round table discussion also took place about the role of museums in Namibia. The panelists were asked whether the concept of a museum was a `European’ one and, if so, whether museums had a role in Namibia.

The panelists confirmed that the idea of preserving our heritage was one that is found in all Namibian communities. However, they argued that we can still do more to develop Namibian museums to reflect the importance of linking objects to our intangible cultural heritage (such as oral traditions and music) and our cultural landscapes.

The AGM participants brainstormed on ways to make Namibian Heritage Week (16th-22nd August) successful in the regions. Mr Tuuda Haitula and Ms Ndapewoshali Ashipala led a lively and frank discussion about the retention of “human capital” in the museum sector. What are the challenges that museum curators face in their work and what can be done to retain professional staff Curators expressed their concern about the pay and conditions and the fact that they often operated in isolation. One of the many recommendations made was that every museum should have an Advisory Committee that would provide support and help with programming.

The AGM concluded with the election of four new members to join the MAN Executive Committee. Six candidates stood for election and presented their manifestos. The successful candidates were: Ms Ndeende Shivute (National Art Gallery of Namibia), Ms Naitsikile Iizyenda (University of Namibia), Mrs Chisengo Nikanor (Military Museum, Okahandja) and Mr Werner Hillebrecht (retired former head of the National Archives of Namibia). The AGM concluded with a tour of Kolmanskuppe Ghost Town (sponsored by NAMDEB), a visit to Diaz Point, a tour of the NovaNam fish factory and a visit to Shark Island. The tour was followed by a wonderful `Spanish Supper’ – a crayfish paella cooked in a massive pan that was shared by all the participants and several local dignatories.

No comments made yet. Be the first to submit a comment

By accepting you will be accessing a service provided by a third-party external to https://www.museums.com.na/