On Wednesday the 02nd January 2019, the Allgemeine Zeitung Newspaper published an article titled “Controversy over Colonial History – Museums Association demands an end to the alleged glorification of the past”.

The Museum Association of Namibia (MAN) strongly refutes the non-factual information and derogatory allegations published in this article which seems intended to damage the good reputation of MAN. The article seems to refer to a report about a Conference on the `Past, Present and Future of Namibian Heritage’ that was organized by MAN in partnership with the University of Namibia and the University of Basel.

On Wednesday the 12th of September 2018, the Museums Association of Namibia sent out a press release to all the major media houses, including the Allgemeine Zeitung Newspaper titled “Press Release: The Past, Present and Future of Namibian Heritage Conference” which provided our official overview of the conference. The same report titled “Thinking About Namibian Heritage” was also published on the 13th of September 2018 on the organisation’s website https://www.museums.com.na/. The article is currently the second most recent article on the homepage of the website. The article in the paper mentioned the website (indicating that the reporter did visit the website but failed to read the information about the Conference published there) which indicates a lack of professionalism. On what basis did the newspaper assume that the document in its possession was an official MAN report?

The Museums Association of Namibia herewith renders its extreme disappointment in this type of sensationalist, unprofessional journalism and therefore demands a written retraction and apology for the publishing of this article which is not only completely devoid of fact but is also slanderous and tarnishing to the reputation of the Museums Association of Namibia and its partner organisations which are also mentioned in the article. We remain strongly committed to the development of museums in Namibia and constructive debate about their role in our society.

The Living Museum of the Ju/'Hoansi-San gives visitors an interesting insight into the life of the friendly San. The Living Museum is an authentic open-air museum where guests can learn a lot about the traditional culture and the original way of living of the San. 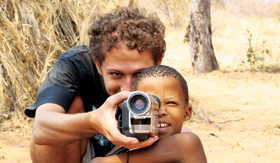